We are currently working with the Waikato Regional Council (WRC) to assess in detail the tsunami hazard at several sites in the Waikato Region. This assessment considers tsunami sources based on subduction zone earthquakes. This study began in mid-2012 with a review and reassessment of the tsunami hazard in Whitianga and a new modelling assessment for the communities of Tairua and Pauanui [LINK TO FULL REPORT]. We are now into the second stage of the project which will assess tsunami inundation in Whangamata and Whiritoa. This study will begin in March/April 2014 and be completed by the end of June 2014. 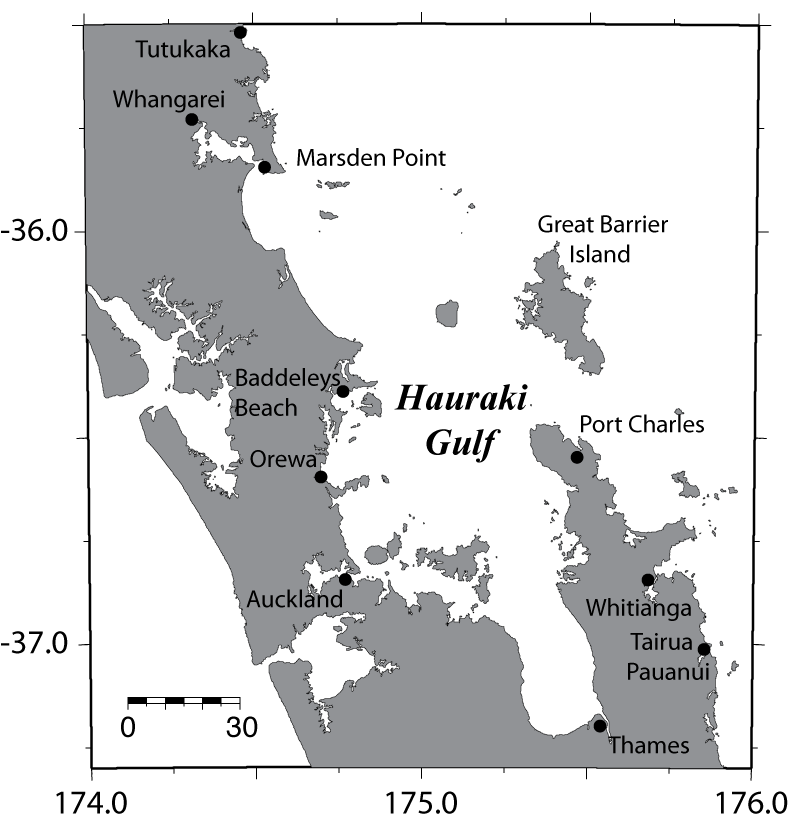 Figure 1. A map of the Hauraki Gulf on the North Island.  The Waikato region encompasses the coastline of the Coromandel Peninsula.

Tsunami sources can be grouped according to their distance and travel time from the source region to the study area. For the North Island of New Zealand, a local source would include near shore earthquake faults, volcanoes and landslide sources that would generate a tsunami affecting the coastline within 1 hour.  A regional source  is one that affects the coast within 1 to 3 hours after the event and a far field tsunami is one that takes more than three hours to reach the coastline.

A subduction zone is a boundary between two tectonic plates where the relative motion of the two plates are in roughly opposite directions and one plate is forced to dive under the other plate. A cross section of a typical subduction zone is shown in Figure 2. Because the plates have a component of up and down motion, earthquakes on these types of fault lines can cause a vertical motion of the sea floor, the principal driving mechanism of a tsunami. In addition, subduction zones have been responsible for the largest earthquakes ever recorded on earth, and as such have the ability to cause very large deformations over large areas.

As shown in Figure 3, the Pacific Ocean is ringed with active subduction zones.  The vulcanism associated with subduction zones is why some people have dubbed the Pacific Rim as the ‘ring of fire’.  In recent history, New Zealand has been affected by tsunami originating from the South America subduction zone (1960 and 2010) and the Japan Subduction Zone (2011). However all of the subduction zones around the Pacific, at one point or another in time, have produced massive earthquakes and equally large tsunamis. 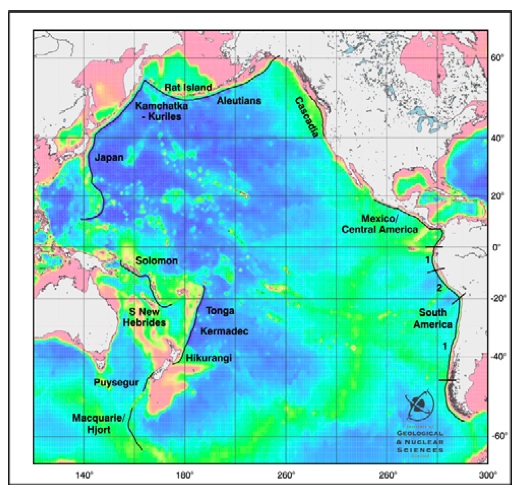 In this study we focused only on regional source tsunamis generated along the Tonga-Kermadec (TK) trench subduction zone and on far-field tsunamis generated along the South America subduction zone. For testing the model we looked at the tsunamis from Japan in 2011 and Chile in 2010. Since these events were recorded on tide gauges throughout New Zealand, this data can be used to assess the accuracy of the computer models.

Through the links below or the menu bar at the top of the page, you can access more details about the different components of the study.