In our assessment of tsunami hazards at Whitianga, we looked at tsunami sources from south America as well as tsunamis originating from the Tonga-Kermadec Subduction Zone.

In 1960, Whitianga was strongly affected by a tsunami which originated in southern Chile. This event caused flooding along the harbor and along portions of Buffalo Beach. Eyewitness accounts of the effects of the 1960 Chile tsunami in Whitianga were reproduced by Bell et al. (2004) who sourced a testimonial by H.W. Pasco and others from the New Zealand Nautical Almanac. An additional eyewitness account (Mr. Bruce Smith) was also provided for this study by staff at the Waikato Regional Council (Vernon Pickett, pers. comm.). These testimonies provide some insight in to the character of the tsunami inundation overnight from May 23 to May 24, 1960. We present these reports in conjunction with modelling results and tide data for that time period. Historical tidal sea level data were extracted from a world tidal model (Egbert et al., 1994).

In his account of the event, Mr. Smith states that he first observed the tsunami effects around 9:30 pm on May 23. At that time he stated that ‘the tide came in and out at a fast rate’. After this initial observation, another vessel took Mr Smith out to his boat which was moored in the harbour. He noted multiple surges over the next hour as he worked to pump water out of the boat which was leaking due to damage sustained during the first hours of the tsunami. Around midnight he made the decision to beach the vessel if it broke free from its mooring. At 2:30 am, a strong incoming surge did just that, as it pushed the nose of his vessel underwater until the mooring line gave way. He momentarily lost control of his boat and was nearly thrown overboard, however he regained control and managed to beach the vessel on a town street ‘approximately 50 m from the Whitianga Pub’s front door’. This location was described in the Pascoe account as being ‘on to the road on the wharf side of Karena Creek’.

The best description of the inundation comes from the Pascoe account which states that ‘the sea came up Monk Street to where the Power Station was and up to the Dairy Company front office steps’, he also noted that there was inundation ‘into the old aerodrome hangar along the northern end of Buffalo Beach, where it wet crates of corrugated iron stored on the floor damaging them’. Pascoe’s account also gives some indication of the current speed when he states that a vessel he was handling was ‘doing 12 knots and going backwards’ due to an incoming surge. He adds that they continued to move backwards for ‘20 minutes until the tide turned and swept us out through the entrance to safety’. He also notes that ‘about 2 am on Tuesday morning […] seemed to be the worst time’. The Pascoe account also describes the weather as ‘very fine’ with ‘practically no wind or swell outside in the Bay’.

These eyewitness accounts offer clues we can use to judge the accuracy of our computer simulations. The landmarks describing areas that were inundated, the character of the water motions and the speed of the currents can all be inferred from these descriptions. We tested a set of six different configurations for the 1960 tsunami source in Southern Chile. Each of the sources varied in terms of the total size of the earthquake as well as variations in the amount of sea floor movement causing the initial tsunami wave. In Figure 1, the different model results are shown in relation to the tide that occurred that day in 1960. In Figure 2 we plot the maximum computed tsunami height and inundation in Whitianga from one of the 6 source models tested. 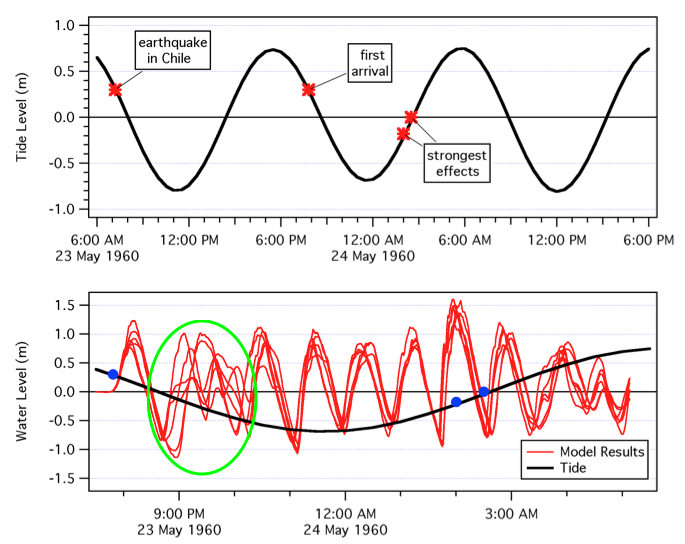 Figure 1. (top) The predicted tide at Whitianga for May 23 and 24 1960, the timing of important events is noted. (bottom) Model results (in red) for the six source models compared to the predicted tide level (black).  Blue dots indicate the modeled arrival time and the time when the worst effects were observed by the witnesses. All of the source models predict the largest waves around the same time as the eyewitness accounts. The time between 9 and 10:30 PM on May 23 (circled in green) is interesting in that some of the model results suggest rapid water level changes consistent with one of the eyewitness accounts.

Figure 2. Modeled maximum water levels and inundation extents from one of the 1960 source models. The modeled water levels compare well with the observations of inundation, particulalry along Buffalo Beach.